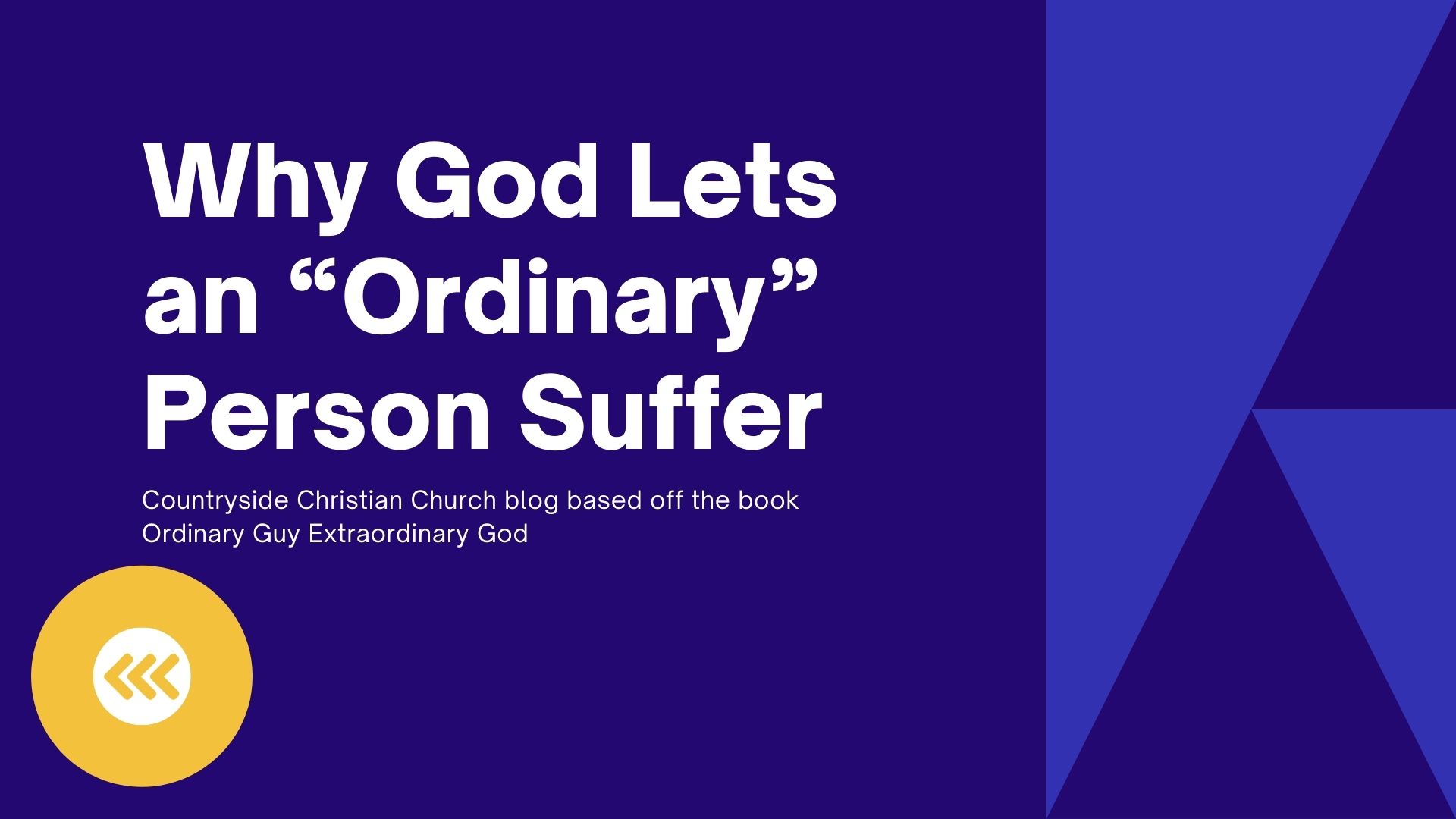 You may wonder why you are suffering, whether emotionally, mentally, physically, economically, spiritually or otherwise. After all, you believe in God. You pray. You give your 10% tithe on Sundays. You try to follow the core values of the Bible as much as you can. Why doesn’t God take away the pain?  For that matter, why did He allow the suffering in the first place? It seems unnecessary, unfair, excessive, and confusing.  But God’s ways are not your ways, and He sees the bigger picture of life.

The story of Joseph in the Book of Genesis illustrates the uncanny ways of God – ways that still apply to all of us today. God remains the same, and He is pursuing your heart to make you more like His Son. It’s been said that Joseph is the closest to a Christlike character in the Old Testament as anyone. Despite his troubles, Joseph did not complain or say a bad word about the Lord.

The Bible reinforces over and over that God wishes to make each of His sons and daughters more like Him in character because we are made in His image, and He has redeemed us through the death and resurrection of His Son.

So, what can we learn from the example of Joseph in Genesis? And how do the lessons play out in the life of any of us, even an “ordinary guy” who is constantly aware of an extraordinary God intent on putting him in uncomfortable situations in order to bring him into His God-given destiny?

The following are five lessons learned from the life of Joseph:

Joseph was thrown into a pit (a well) because his brothers hated him and wanted to destroy him. You may have never been physically thrown into a pit, but you may have fallen into a “pit” of depression or a “pit” of hopelessness or fear or loneliness or worry or guilt and shame. You may not have even seen it coming, but life’s circumstances seemingly turned against you – and you experience a loss of control.

Pastor Glenn Davis, the lead pastor of Countryside Christian Church, details how he was thrown into a “pit” of despair in his autobiographical book, Ordinary Guy, Extraordinary God. A family tragedy upended his life, sending him careening into a depressive state that created a dire situation. If God wasn’t going to show up and deliver him, Pastor Glenn was a goner. He wasn’t likely going to make it. It looked like his work as a preacher and church pastor was coming to an end.

God did not prevent Pastor Glenn from falling into this “pit.” Just because Pastor Glenn is a church leader and a godly man who has sacrificed for the Kingdom of God and for the people who attend Countryside, Pastor Glenn was not immune to hard times and deep pain. Yet, God, who is eternal, is still merciful, kind, loving, patient and in control. What a human being sees as a problem or unfairness, God sees as the beginning of a process to produce a result that will bless other people.

God made Joseph wait. This waiting period did not mean that God had abandoned or forgotten about Joseph. It meant that God’s plan was unfolding in God’s timing. There were reasons for Joseph’s waiting. The time was not right, even though, in the natural, Joseph likely wanted change to happen faster. But the adversity had to fulfill its purpose, both in terms of preparing Joseph’s heart for the next move of God and lining up the circumstances to turn toward Joseph’s favor at the appointed time.

Likewise, God makes all of us wait at times for His plan for our lives to unfold, no matter what the circumstances. For example, Pastor Glenn describes in his autobiography how God did not rescue him immediately from the emotional darkness that had enveloped him in the aftermath of a tragedy. Countryside’s lead pastor experienced a dark night of the soul that lasted a long time, but it did not mean that God forgot about him or was not answering his prayers. It meant that the answer to the prayers was “Wait.”

It’s similar to when a father tells a child to “Wait,” even when the child is struggling with something and, to the child, the world is collapsing in on them.  Just as a parent’s perspective is different than a child’s perspective, God’s perspective is different than our human perspective. By allowing troubles, God could be protecting us or preparing us or strengthening us or reshaping our character. Waiting can be a big blessing in life. When you look back 10 years, 20 years, 30 years, you’ll see how the power of waiting, which requires trusting God, set you on a course of blessing that exceeded your expectations.

[3] The Outward Circumstances Are the Opposite of Your Inner Dreams

Joseph had dreams for his life. He envisioned himself as successful in life, and he thought that his brothers would rejoice with him that he had this majestic confidence that God would raise him up as someone with power and authority. But his circumstances changed when his brothers, who were increasingly jealous and resentful of him, plotted against him and sold him into slavery. It surely led Joseph to question how he went from having hopeful, optimistic dreams to be enslaved. It didn’t make sense. Reality was the opposite of the dreams in his heart.

You have dreams and aspirations for your life. You may be going through your own process of understanding what are God-given dreams for your life and what are simply your own dreams.  But, nonetheless, you may feel that circumstances are not lining up with your dreams. You may feel frustrated that the more you believe in and pursue your dreams, the farther away they seem. This is not unusual.

In his book, Pastor Glenn revealed that certain people felt that God was calling him to be a pastor. At first, he resisted it, preferring to embrace his own self-centered goals for his life, but then he opened himself up to what God wanted to do in his life. One might think that all of Pastor Glenn’s problems were solved. However, it was not so. Pastor Glenn had to go through a long, bumpy process to become lead pastor and then to continue in ministry, even after having many reasons to quit ministry completely. He had to look beyond the outward circumstances and keep the dreams, born of the Spirit, alive in his heart.

Joseph was tempted to have sexual relations with a woman outside of marriage. However, knowing the Truth that God hates immorality (yesterday, today and forever), Joseph did not want to sin against God by having sexual relations with a woman who was not his wife. Offended, however, the woman, who was the wife of Potiphar, falsely accused Joseph of sexually assaulting her. It was clearly unfair to Joseph, but he had made the right choice in the eyes of God.

Temptation is designed to present a temporary pleasure that has a hidden penalty, which gets triggered soon after the initial experience. It leaves the person feeling unsatisfied and hungering for the next experience to try to regain the momentary euphoria. It has a long-term detrimental effect. Sexual temptation, specifically, has a high penalty built-in, yet it’s packaged in an appealing way to trick the person into indulging with a false sense of “no consequences,” and, thereby, mocking God and His Word. God does not even have to punish the person. The sin in the immorality already has a built-in, self-perpetuating “engine” to cause a person to be increasingly dissatisfied and miserable over time. The glorification of “self” can never make a person truly happy.

When Pastor Glenn went to college, he faced temptation, packaged deceivingly in a “party” environment and exacerbated by a naïve youth culture that denied a reality: “actions have consequences.” He had to make a decision: follow Jesus and remain on the narrow path to a godly marriage, or throw away the future marriage that God was lining up for him with the most amazing wife possible for him. He had to decide for himself whether he would believe the Word of God and put his future on the line, or be sucked into godless culture that uses a person for their pleasure and then spits you out. In contrast, following the ways of the Lord is a safe haven.

God worked all of Joseph’s problems for good in the long run. Although it sounds terrible that God allowed Joseph, an innocent man, to stay in jail for years, Joseph would have never been raised up to be the second most powerful person in the land if he had not been thrown in the pit and then sent to prison. God used all of the negative things to string together a tapestry of remarkable blessings. Joseph partnered with God in the sense that Joseph did not complain. He trusted God, even if his emotions wanted him to feel discouraged. He may have wondered why the bad experiences were happening, but he kept his faith in God.

Likewise, as part of the spiritual family of Countryside Christian Church, we have seen what God has done to restore Pastor Glenn and empowering him with a fresh, new vision for our church. His story from being down-and-out to seeing the hand of the Lord raise him up for the purpose of spreading the Gospel of Jesus Christ shows how “an ordinary guy” can be used, not because he avoided adversity and hard times, but because he went through the fire of desperation, adversity, hopelessness and grief. Then God did a miracle.

You can read all about Pastor Glenn’s testimony in his book Ordinary Guy, Extraordinary God. For more information, click here.