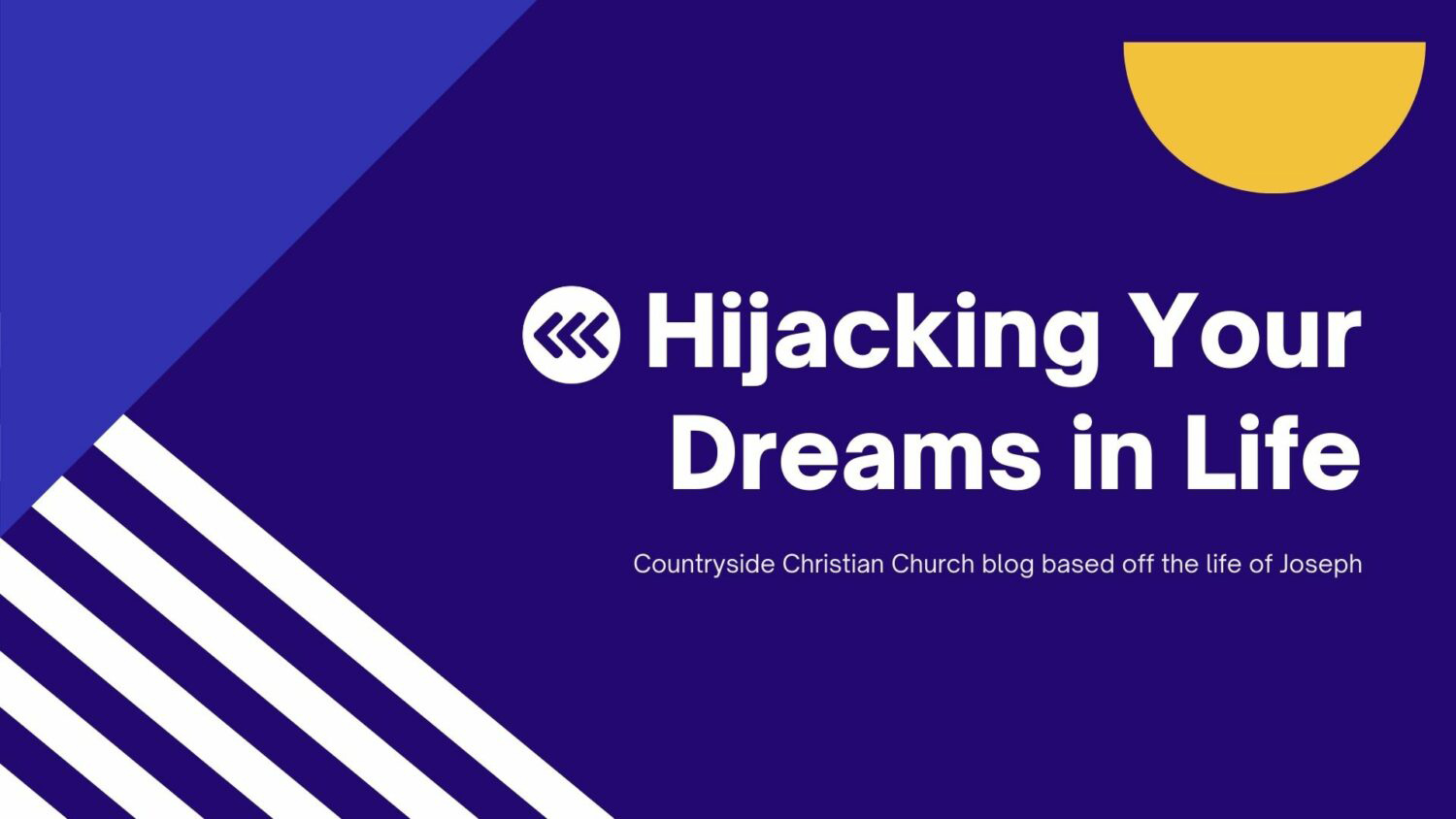 Hijacking Your Dreams in Life

Do you ever feel like the dreams you have had for your life were hijacked?  You didn’t accomplish what you thought you wanted to accomplish in life so far. Things didn’t go according to your plan. You even prayed to God as sincerely as you knew how, but circumstances went sideways, and you thought your life would have turned out so differently.

Reality-check: Have you ever considered that God’s plan for your life may be better than your own plan?  While all of us are finite in our thinking, He is infinite in His thinking and knows what we don’t know. But you are not alone if you feel like you have too many problems and troubles in your life to think clearly or “perfectly” when you feel like you are just barely holding onto dear life to get through another day. The good news is that what you can learn from the life of Joseph will take the pressure off you.

If you are in a “pit” of worry or fear or anxiety or pain or frustration or regret or guilt or depression or despair, how can God ever bring to pass the dreams, aspirations, and desires of your heart?  If you feel pressured, pushed down, dismissed or broken, the story of God’s work in Joseph’s life can give you hope.

Understanding how God works is a key to wisdom and unlocking the warehouse of blessings prepared for you.

Genesis 39:1-5 says: “Now Joseph had been taken down to Egypt. Potiphar, an Egyptian who was one of Pharaoh’s officials, the captain of the guard, bought him from the Ishmaelites who had taken him there. The Lord was with Joseph so that he prospered, and he lived in the house of his Egyptian master. When his master saw that the Lord was with him and that the Lord gave him success in everything he did, Joseph found favor in his eyes and became his attendant. Potiphar put him in charge of his household, and he entrusted to his care everything he owned. From the time he put him in charge of his household and of all that he owned, the Lord blessed the household of the Egyptian because of Joseph. The blessing of the Lord was on everything Potiphar had, both in the house and in the field.”

This scripture shows how, even though Joseph was in a difficult circumstance, the Lord God was still with him – just like the Lord is still with you in whatever circumstance you are in. God is with you, no matter what stage of life. And He wants you to prosper. You have favor in God’s eyes. He wants you to prosper. He will cause you to prosper as you trust in Him. Just as Joseph had favor in every area of his life, so can you. The Holy Spirit will anoint you to do things that only He can empower you to do.

Look at what God did for Joseph. He took him into the house of Potiphar and blessed everything he touched. Just because you may have a difficult boss or you are being treated unfairly at work or you are stuck in a dead-end job or you feel ignored, slighted or used, God will turn things that make no sense into something that works in your favor. Pursue God in praise and worship and read His Word consistently, so that your spiritual eyes and ears will be wide open to hear and see what God is doing in your life.

But having God’s favor does not mean the world will “love” you unconditionally and have your best interest at heart. We live in a fallen world. Case in point: Potiphar’s wife was attracted to Joseph, who was young, kind and strong. She tried to seduce him behind her husband’s back. In response, Joseph wanted to stay true to God and find a way out. He escaped the snares of the temptation.

Genesis 39:6-10 says: “So Potiphar left everything he had in Joseph’s care; with Joseph in charge, he did not concern himself with anything except the food he ate. Now Joseph was well-built and handsome, and after a while his master’s wife took notice of Joseph and said, ‘Come to bed with me!’ But he refused. ‘With me in charge,’ he told her, ‘my master does not concern himself with anything in the house; everything he owns he has entrusted to my care.  No one is greater in this house than I am. My master has withheld nothing from me except you, because you are his wife. How then could I do such a wicked thing and sin against God?’ And though she spoke to Joseph day after day, he refused to go to bed with her or even be with her.”

When you’re in the middle of doing something good for God, there is often temptation. The Bible says that God provides a way out of temptation. If we emulate Joseph, then we do the godly thing, like he did. It’s up to us to flee from evil. God is seeking a person who will persevere.

Genesis 39:11-14, 19-20 says: “One day [Joseph] went into the house to attend to his duties, and none of the household servants was inside.  She caught him by his cloak and said, ‘Come to bed with me!’ But he left his cloak in her hand and ran out of the house. When she saw that he had left his cloak in her hand and had run out of the house, she called her household servants. ‘Look,’ she said to them, ‘this Hebrew has been brought to us to make sport of us! He came in here to sleep with me, but I screamed’…  When his master heard the story his wife told him, saying, ‘This is how your slave treated me,’ he burned with anger. Joseph’s master took him and put him in prison, the place where the king’s prisoners were confined.”

In Joseph’s case, Potiphar’s wife falsely accused the young man of sexually assaulting her. Although it was untrue, Joseph was punished. It was a setback, but, in reality, it was a setup. Never mind about Potiphar’s overly amorous wife, but God Himself was setting up Joseph for the next major stage of His plan for Joseph’s life. God was going to use this setback cleverly to propel Joseph forward.

God is setting up something so great for you. You would not be able to do it in your own strength. But God will use the challenges and setbacks in your life to fulfill His purposes for you.

Timeless Wisdom Sourced from the Bible

The following are three lessons learned from Joseph’s experience:

We live in a world that says you need to do it “your way.” But have you failed after doing something your way?  It is better to allow God to work in every situation. Allow him to be in the driver’s seat. He will move you to where He wants you to be. You can say, “Lord Jesus, take the wheel of my life. I’m riding shotgun.” Giving control of your life to the Lord is part of the blueprint of walking with Him. It takes the pressure off you.

Proverbs 3:5-6 says: “Trust in the Lord with all your heart and lean not on your own understanding; in all your ways submit to him,  and he will make your paths straight.”

Joseph had reason to feel entitled, but he led with humility. Instead of choosing his ego, he chose God. He chose character over momentary pleasure. How much can ego mess up a person’s life?  Humbling yourself before the Lord God allows you to tap into the graciousness of God. Instead of claiming “I’m entitled to this” or “I don’t deserve this pain,” you check yourself before you wreck yourself. Jesus came to serve, not to be served. We are called to be Christlike. Ego, which glorifies “the pride of life,” is a stumbling block for people.

Unmet expectations cause separations. This is why many people have left churches and turned away from God. They felt like their expectations weren’t met. They were disappointed. However, not everything will go your way, just because you are a Bible-believing Christian. Nonetheless, you can be rest assure that God is faithful when you don’t quit. Allow God to manage your expectations. A “disappointment” can actually be preparation for the destination God has for you. Be like Joseph, who didn’t give up in prison. God continued to be faithful to Joseph. Joseph still had favor behind bars. Keep your character and integrity in front of you.

Genesis 39:20b-23 says: “…while Joseph was there in the prison, the Lord was with him; he showed him kindness and granted him favor in the eyes of the prison warden. So, the warden put Joseph in charge of all those held in the prison, and he was made responsible for all that was done there.  The warden paid no attention to anything under Joseph’s care, because the Lord was with Joseph and gave him success in whatever he did.”

One of the best things you can do is to embrace the plan that God has of your life. God is good, and His ways are higher than our ways. All of us tend to find it easier to believe for other people. We believe God can bless others, but it’s harder for us to believe it for ourselves.  Yet, the truth is that God wants to bless you. It’s for you to believe it. Do you choose to trust God today? God wants you to re-engage with the dreams you have in your heart for your life. God is not finished with you. Stay faithful to God, no matter what. Just like Joseph, you can go “from the pit to the palace” in your own life. The best is yet to come.

Things to Think About